A suspected plantain thief, Caleb has been stoned to death at Mankessim in the Mfantseman Municipality of the Central Region.

He was found tied to a palm tree with a bunch of plantain beside him.

Beside him were Stones, blocks, and sticks which were suspected to have been used in lynching him by unknown persons.

Information gathered indicates that the suspect got missing on Friday 6th May 2022 around 7:30 PM, when he went to town and never came back home.

Family members and youth of the area searched for him for hours but he was nowhere to be found. They later found him tied on a Palm tree Saturday around 5:00 am suspected to have been stoned to death with visible marks of assault on him. 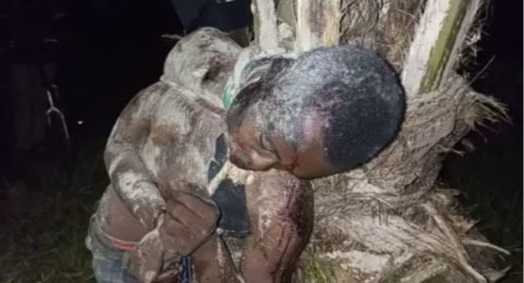 The Assembly Man for Metro Electoral Area Hon. Cephas Arthur in an interview said this is the third time people have been lynched within one week at Mankessim, a development he describes as very worrisome.

He said, the suspect used to work at one of the supermarkets in Mankessim and it comes as a shock to residents that he would be accused of stealing a bunch of plantain.

According to the Assemblyman, he suspects some people murdered him and put plantains beside him to make people believe that he stole and was murdered.

Meanwhile, the body of the deceased has been deposited at the Saltpond Government hospital morgue while the police commence an investigation.

Parliament to resume sittings on Tuesday