The West Africa Centre For Counter-Extremism (WACCE) has said Ghana is prone to terrorist attacks.

According to the Centre, irrespective of the fact that Ghana has managed terrorist threats for some time “Yet Ghana has been so close to terrorism.”

The report disclosed that already, more than 13 Ghanaians are believed to have travelled to fight with terrorist groups since 2015.

“Up to twenty-three (23), others have been dissuaded from leaving to join extremist groups Ghana’s first recorded case was Nazir Alema Nortey, a young university graduate, who shockingly left the country in august 2015 to join ISIS before sending a message back to his parents to announce his newfound cause. He was killed in Syria in April 2016.

“Professor Kofi Awoonor, a renowned Ghanaian poet and academic, was killed in the West Gate Mall attack in Nairobi, Kenya when Al Shabab fighters besieged the mall in 2013.

The Report further disclosed that “Even though the fatality numbers are presently down from the peak of over 7,200 in the region in 2014, the threat has increased in complexity and geographical spread. Today 53% of all ECOWAS have now been encircled by the threat. These developments are dangerous for Ghana.

“Ghana’s proximity to these countries (Burkina Faso to the North, Benin and Togo to the East and Ivory Coast to the West) exposes the country to extremist recruitment or attacks or both.” 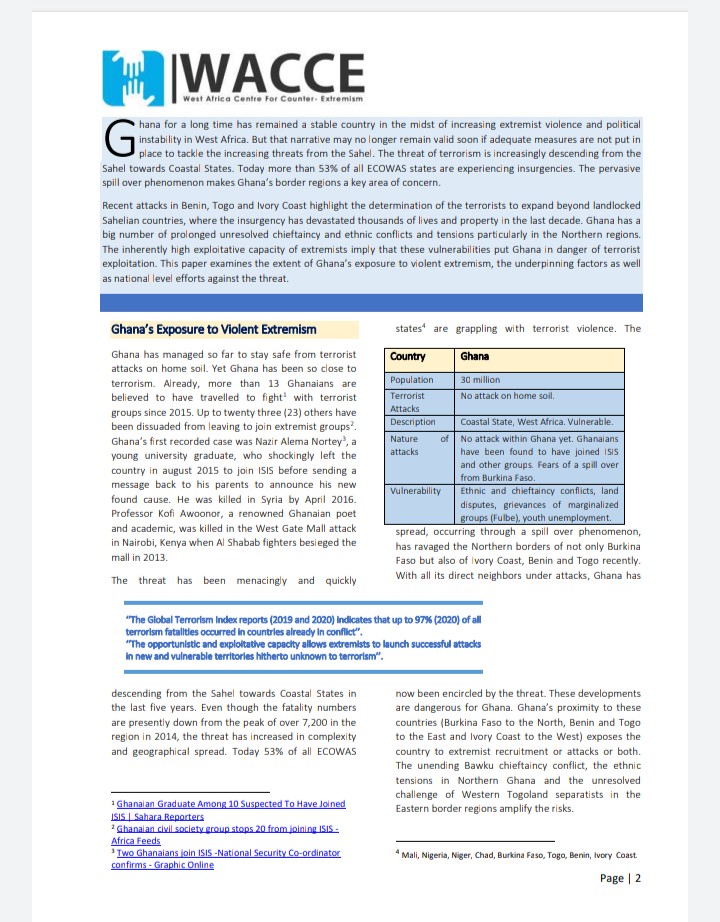 Attached is the full report below

Dr. Yaw Anthony Baah Is Either Clueless Or Has Been Compromised. Adam-Gh Fired Back