The love for one’s profession can be manifested in different ways, one of which is practising it throughout one’s life. The practice can be classed in the active and passive phases.

Practising a profession for over five decades is a huge feat and that is the height attained by a lawyer by name, Isaac Otchere Darko.

His brief profile was shared on social media earlier this week by Edudzi Kudzo Tameklo, a member of the National Democratic Congress’ Legal team.

According to Tameklo’s May 20 Facebook post, Otchere Darko will be clocking 53 years at the Bar in five months.

The senior lawyer he added, had disclosed to him that his mate in law school was retired Supreme Court judge, Justice Kpegah.

Full name, Francis Yaonasu Kpegah, the one-time acting Chief Justice served at the apex court between 1993 and 2008. He was appointed to the Supreme Court on 6 January 1993 by former President Jerry John Rawlings.

He acted as the Chief Justice of Ghana following the death of George Kingsley Acquah on 25 March 2007 and was replaced by Georgina Theodora Wood on 15 June 2007 as the new Chief Justice.

“Great privilege meeting this senior lawyer. He is Isaac Otchere Darko Esq
He will be 53 years at the Bar in October 2022. He tells me that Justice Kpegah was his mate in Law School.

“His case was the first to be called and he deserved it. He said this work, once you start you can’t stop. God bless him,” Edudzi’s caption accompanied by a photo of himself and the senior lawyer read. 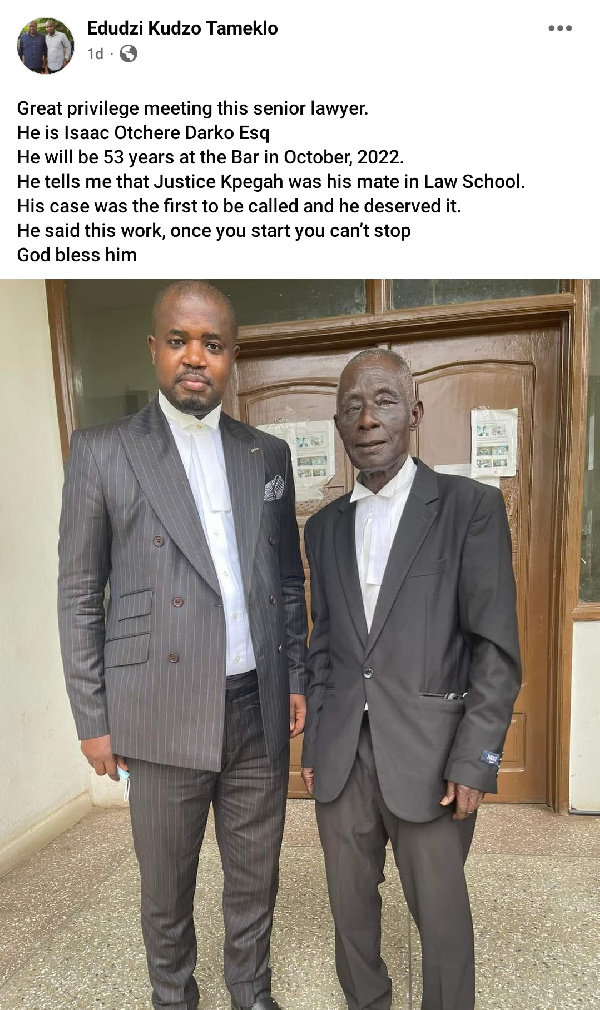 Video: Shatta Wale took Michy home the same day I broke up with her - Apaatse