The media fraternity was thrown into deep grief as ace broadcaster Kevin Nana Yaw Agyeman was laid in state on Saturday 7th May 2022 at his Aboabo Kesse Residence in the Asokwa Municipality of the Ashanti Region.

He stands tall with close to three decades in both urban and mass radio; having trained and worked with several top presenters and musicians in the country.

His burial was virtually a convergence of family and friends; media personnel; fans of Big Shark; serial callers, musicians, and the entire management and staff of EIB Kumasi Cluster. 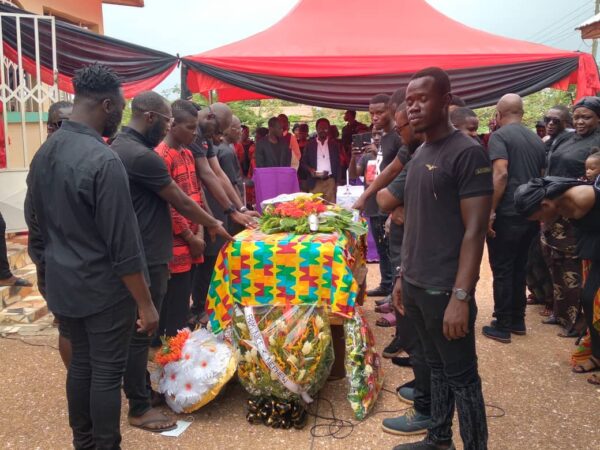 In a tribute read by Programs Manager of E.I.B. Kumasi Cluster Julius Caesar Anadem, Staff and Management of EIB eulogized him for making impact that transcended the airwaves.

“Beyond radio. Big Shaq! Our Big Shaq! Was a warm-hearted human being. He never looked down on another. He never turned an intern away. Hardly would you hear Big Shaq raise his voice at anyone.”

“He could roll with the big boys; sit with intellectuals; engage national leaders and great political heads of our time and yet stop by the roadside to ask the street boy, “How are you doing?” That was how kind-hearted and human he was.”

“For us as workers and managers; we will miss a brother and a good friend. He wouldn’t mind joining anyone’s show to make an input. We had plans Big Shaq. We never got the hint that death would take you away,” The tribute read. 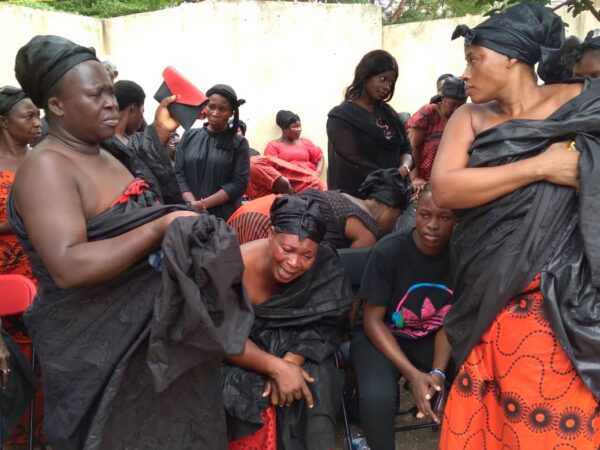 He was survived by a wife Esther Tatiana Agyemang and five children.

It was solemn as his Children and siblings took turns to present their tributes in his memory.

“Our father lived his life with a passion for life and love for his family. We saw this in the way he worked ardently to provide for us. His tremendous love for his family could almost be touched in the days when he made inquiries about us before he even retired to his room. He was a father who truly cared. And he wasn’t afraid to show it. This brings us to the part where we are constantly reminded of his amazing strength as a man, husband, and father.”

Daddy stood tall and helped us mature. He was our mentor who stood strong to the very end. Though there is a big hole in our hearts now that he is gone, we won’t let our fortitude lapse because we share in our father’s extra ordinary strength and hope of life beyond this earthly sphere,” His children read.

“You were our brother, and we loved you like no other. In our hearts you’ll always be; you’ll be our guide and help us see. We’ll never forget your soothing voice, but now I have to let you rest,”

Although without you our world’s a mess. We will miss you with all our hearts and wish we never had to part. But we know Heaven has given us a new guardian angel. May you continue to Rest in Peace with Kwame, Daa, and Yaayaa in the Bosom of God. Till we meet again in Eternity,” Shaq’s siblings poured out amidst sorrow and tears.

Former colleagues of his who traveled from far and near shared their fare thee well messages as they paid their last respects to Big Shark.

“Shaq was a DJ but as a journalist, he was the one I would go to for information because of his deep knowledge of national and current affairs, politics, sports, and international news. We have really missed a gem,” Libya Boga of Sompa FM recounted.

Nhyira FM’s Kingsley Odame Amoako a.k.a. Asanka Boyoyo recalled, “the last time we met was in the Stadium where he came to watch a Kotokor Match. We shared a jargon ‘Asomudro’ and we had a chit-chat as old palls and that was the last time I met my friend. May God give his soul rest.”

Popular Entertainment commentator ABORO disclosed, “Shaq was my boss and brother. After working for free for eight good years, Shaq was the first person to push a radio station to give me my first salary.”)

The funeral was graced by C.E.O. of the EIB Network Nathan Kwabena Anokye Adisi and his executive management team who were present to ensure he was accorded a befitting funeral and burial.

Other media stalwarts and celebrities Andy Dosty; Amandzeba and Abeku Santana were present to bid him farewell with a host of personalities like Shaq’s buxom friend Lord Kenya in the United States of America, joining the virtual feed.