Editor-in-Chief of the New Crusading Guide, Kweku Baako Jnr, has contested assertions by vice president of IMANI Africa, Kofi Bentil, that the Achimota Forest Reserve has been sold.

Kofi Bentil in a post on his Facebook timeline on Tuesday stated that the forest reserve has been sold while additionally bidding it farewell.

Bentil’s claim did not go down well with the veteran journalist who wondered if the recent report of the alleged sale of the forest reserve was not the same as the one that got Cabinet approval for a PPP in September 2013.

Which arrangement was to have a portion of the forest developed into $1.2billion Accra Eco Park Project.

“I recall media reports indicated that Aikan Capital had won the bid to execute the project. Aikan Capital was to design, build and operate the Facility @ Parts/Portions of the Achimota Forest Reserve for 10 years in accordance with a lease agreement.

“How different is the latest development from the project concieved by the Government of Ghana in 2009 and Cabinet approved in September 2013; the sod cutting of which was executed in August 19, 2016? Any help? Kofi Bentil,” Kweku Baako commented

Responding to the enquiry, Kofi Bentil indicated that ‘unreliable’ information suggested that the overarching plan of the government was to sell off the forest reserve.

He also lamented the lack of information on the matter by government leading him to speculate.

“Senior [Kweku Baako], the problem in this nation is that government prefers to operate in secret until we smoke information out.

“We are Unreliably informed that there’s a deal to sell off the forest. We need info but it seems we have to do RTI or float balloons like this for feedback,” he said.

Kweku Baako will have none of it as he said the “confession” by Mr. Kofi Bentil was at variance with the claim that the forest had been sold.

“I hear you bro. But that is not the same as the said “forest reserve” having been sold! Or?” he quizzed.

In the said E.I 144, a portion of the Achimota Forest by presidential order had been declared as ceased from being recognized as a forest reserve effective May 1, 2022.

It also details that District Land Use and Spatial Planning Authority must prepare a master plan for the development of the land and submit to the Lands Minister for approval.

Again the District Land Use and Spatial Planning Authority has been tasked to take into consideration the protection of the ecological integrity of an adjoining forest reserve while preparing the master plan.

Meanwhile, Lands and Natural Resources Minister, Samuel Abu Jinapor has dismissed claims that the Achimota Forest has been sold off.

In a Facebook post on Tuesday, Mr Jinapor said that the “Achimota Forest has not and will not be sold.” 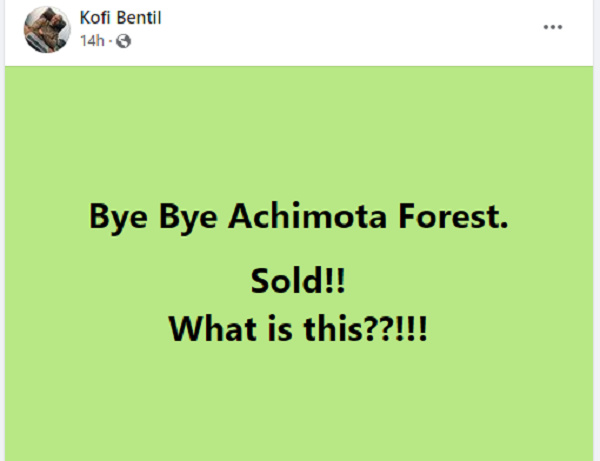 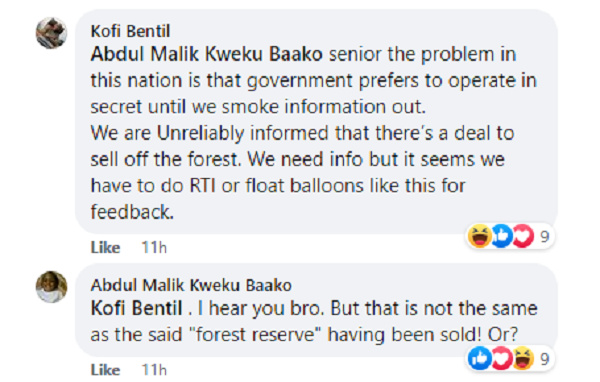 “I Had A Clear Vision; The Victory Will Be Sweet: Prophet Nigel Gaisie Drops Another ProphesyThe founder and leader of Prophetic Hill Chapel have recently raised lots of concerns after he revealed another unexpected prophesy again ahead of the most anticipated general elections. Not very far in the past, Prophet Nigel Gaisie made a move to visit a similar sanctuary where he for the most part guaranteed to constantly have endless dreams about Ghana and other related forecasts as he has as of late dropped one more remarkable directive for Ghanaians. As indicated by a new web-based entertainment post at a similar sanctuary where he anticipated the result of the past official races, Prophet Nigel Gaisie featured that, God had uncovered one more vision to him about Ghana and thus no maneuvers can or will stop one more looming triumph for the country. “I just had a reasonable vision about Ghana. The Lord said, ‘The triumph will be sweet’. No ruses can or will stop this triumph. Much thanks to you, Jesus. Everyone ought to be confident. It will be well. God has Ghana at the top of the priority list”, Prophet Nigel Gaisie decidedly uncovered. Despite the fact that Prophet Nigel Gaisie didn’t uncover the name of who might arise triumphant, most Ghanaians appeared to have proactively expected the result of parliament and the approaching races among others.