Edudzi Kudzo Tameklo, an aide to former President John Dramani Mahama, has reacted to the impending arraignment of a former head of the Public Procurement Authority, PPA, over corruption-related offences.

The Office of the Special Prosecutor, OSP, announced on Wednesday, May 18, 2022; that Adjenim Boateng Adjei will face charges for his role in the “Contracts for Sale” scandal uncovered in an investigative piece by Manasseh Azure Awuni.

According to the statement, a brother-in-law of Adjenim Adjei, Francis Kwaku Arhin, is also facing one count for his role in the scandal.

The case against the two was filed at the Criminal Division of the High Court in Accra on Wednesday, May 18, 2022.

Edudzi, who is also a member of the legal team of the National Democratic Congress, NDC, posted about the charges on his Facebook timeline on May 18, pointing out the detailed nature of the charges.

“Read through the various counts of criminal charges filed by the Office of the Special Prosecutor. The Particulars are so detailed that the accused persons are not left in the dark. I am impressed,” he said.

This will be the first case investigated and prosecuted by Kissi Agyabeng following his appointment as Special Prosecutor in 2021.

See the statement below: 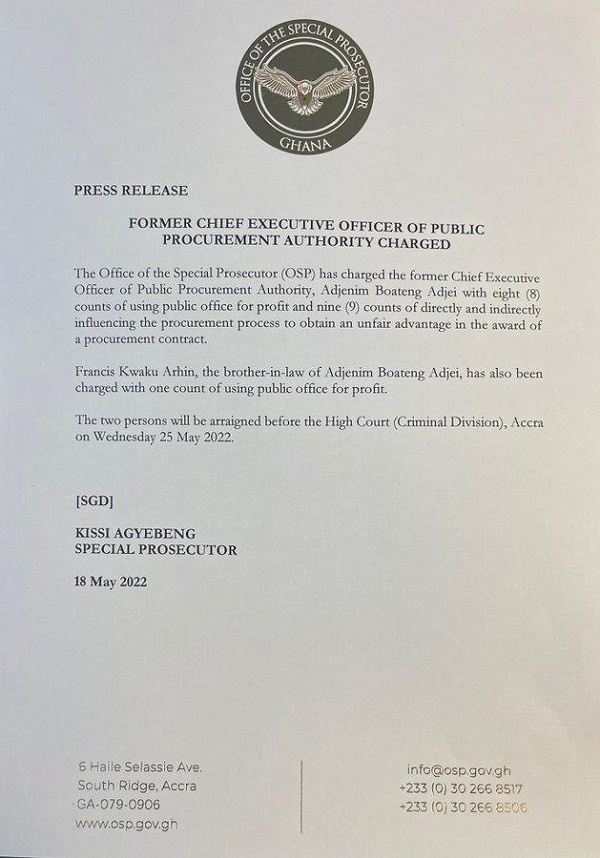 About the ‘Contracts For Sale’ investigation

Manasseh’s piece dubbed “Contracts for Sale” realized the transfer and deposit of millions of monies into Adjenim Adjei’s accounts while he was in office.

For the two and half years that he was head of PPA, Adjenim Adjei accumulated more than GH¢41 million in his cedi, dollar and euro accounts.

The investigation by Manasseh Azure Awuni found that the CEO formed a company, named Talent Discovery Limited, with his brother-in-law after his appointment as the CEO of the PPA.

This company is said to have won a number of government contracts, which were approved by the PPA board of which Mr. Adjei was a member through the restrictive tendering method.

Manasseh’s investigation found that the company did not have the capacity to execute the contracts and that, Talent Discovery Limited went on to sell the contracts to individuals and companies without the knowledge or approval of the awarding entities.

The president further referred Mr. Adjei to the Commission on Human Rights and Administrative Justice (CHRAJ) and the Office of the Special Prosecutor (OSP) to investigate his conduct.

CHRAJ in 2020 released a report on its investigation conducted into the matter and found Mr Adjenim guilty of conflict of interest and other offences.

CHRAJ subsequently banned Mr Adjei from holding public office for 10 years. An appeal which was later filed on his behalf at the High Court against the ban failed.

“We find the Respondent’s [Mr. Adjei’s] explanation was completely unsatisfactory and that he could not explain the source of the large volumes of excess wealth that passed through his bank accounts between March 2017 and August 2019 (unexplained wealth),” CHRAJ’s report said.

Ghanaians learning their lessons after voting me out – Mahama