Sammy Gyamfi, National Communications Officer, NDC, has alleged that the Achimota forest land has been shared among the officials of the Akufo-Addo/Bawumia-led administration.

He noted that his allegation is based on some portions of the Last Will of the late Kwadwo Owusu Afriyie, popularly known as Sir John, which he has sighted.

In a post on his Facebook timeline, Sammy Gyamfi wrote: “portions of the Last Will of the late Kwadwo Owusu Afriyie (A.K.A Sir John) shows that officials of the corrupt Akufo-Addo/Bawumia government have already stolen and shared the Achimota Forest lands for themselves.”

“See points d, e, & f of the attached document for incontrovertible proof of this fact,” he stated.

In the said Will, Sir John wrote that he gives the portion of land he owns at the Achimota Forest measuring 0.987 acres to his nephews, Michael Owusu, Yaw Boadu and Kwabena Amoateng, forever.

“I give my land also situate at Achimota Forest in the name of Fasoh Limited and measuring 0.987 acres to my nephews Michael Owusu, Yaw Boadu and Kwabena Amoateng, forever.

“I jointly own a piece of land at Achimota Forest with Charles Owusu. upon my demise, my portion of the said land should be given to Ruth Korkor Odonkor.

“I give my portion of the land that I jointly own at the Achimota Forest in the name of DML Limited to Elizabeth Asare Boateng who at the time of making this Will is domiciled in the USA, forever,” portions of Sir John’s Will read.

Meanwhile, the Ministry of Lands and Natural Resources has indicated in a statement copied to GhanaWeb that, it has requested all documents relating to the Achimota lands, as part of an initial inquiry to ascertain the veracity of the claims which is contained in the Will of Sir John.

“Considering that the issues that form the basis of the allegations predate the tenure of the current Minister, Hon. Samuel A. Jinapor, MP, it is important that he is seized with the full facts to enable him to take appropriate action, if, indeed, there is any merit in the claims.

“The Ministry assures the general public and the good people of Ghana that it will ensure that the national interest is protected at all times, especially in matters pertaining to the Achimota Forest,” the statement signed by the PR Unit of the ministry concluded. 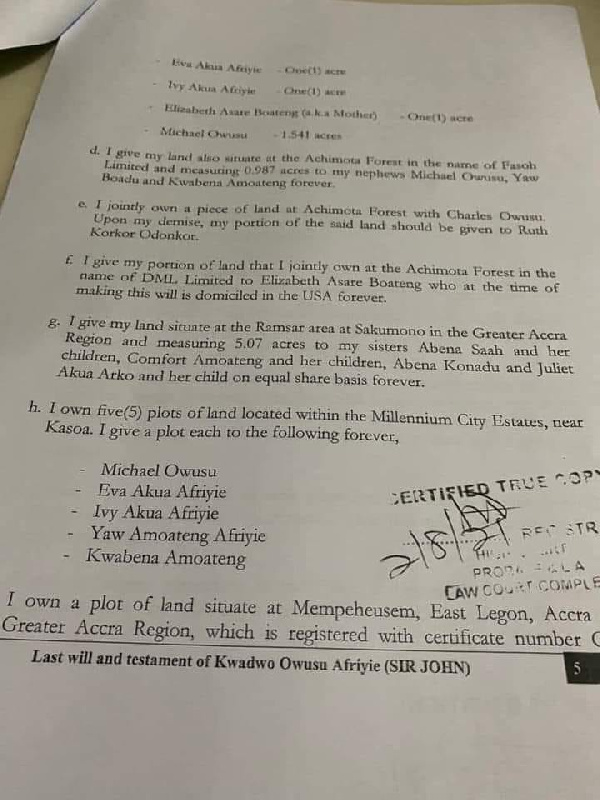 There was a news report suggesting that the Government has gazetted an Executive Instrument (E.I.) to approve the redesignation, sale or development of Achimota Forest.

A document from the Ministry of Lands and Natural Resources, making reference to an E.I., stated that the Achimota Forest Reserve is to no longer be regarded as a forest reserve.

“An Executive Instrument (E.I.) 144 gazetted on behalf of President Akufo-Addo by the Lands Minister Samuel Abdulai Jinapor indicates that effective May 1, 2022, the land on which the Forest is located shall cease to be a forest reserve.

“The President’s action was in accordance with Section 19 of the Forest Act, 1927 (CAP. 157) which gives him the authority to declare that particular land is no longer required as a forest reserve,” portions of the purported E.I. read.

But, Samuel Abu Jinapor, Minister, Lands and Natural Resources, dismissing these accusations at a press conference on Tuesday, said the Executive Instrument, E.I. 144, pertained to 361 acres of peripherals of the Achimota forest.

He explained further that the government is returning to its custodial owners, identified as the Owoo family because the land was not being used for its intended purpose, which included the extension of the Achimota School.

World faces big challenges over Covid, monkeypox and wars – WHO

E-levy will be canceled – Security Analyst

Shocking Audio: NPP executive confesses on how COVID fund was squandered among themselves