number of students of the Kwame Nkrumah University of Science and Technology (KNUST) have been deferred by the University following their inability to pay their school fees.

Read Also:Don’t blame us for your problems; Russian Embassy to Ghana

The University in its earlier release indicated that all students who have not paid at least 70 percent of their school fees by 7th April, 2022, would be deferred automatically.

However, Citi News checks showed that the policy did not take effect immediately as persons who fall within that category were allowed to write their mid-semester examination which began on 11th April, 2022.

Also check;Minority leader and two other MPs files interlocutory injunction on the implementation of E-levy in supreme court

The University Relations officer of KNUST, Dr. Daniel Norris Bekoe, in an interview with Citi News said the University’s decision is justified as some students use school fees given to them to engage in gambling and other stuff.

Some students, however, stated that they are genuinely needy and the students’ bursaries and other scholarships they had applied for had not taken effect and as such, they want the school to extend the period.

The affected students appeared to have had some sort of respite since the deferment did not take place automatically.

Must Read;Court Ceases assets worth $7B from Roman Abramovic

In what appears to be a twist, some students told Citi News on Tuesday, 19th April, 2022, that they have started receiving messages that they have been deferred due to their inability to meet the minimum requirements of the KNUST fees Credit and Debt Management Policy.

“Dear student, your programme has been deferred as you have not met the minimum requirement of the KNUST fees Credit and Debt Management Policy. Thank you,” one of the messages read. 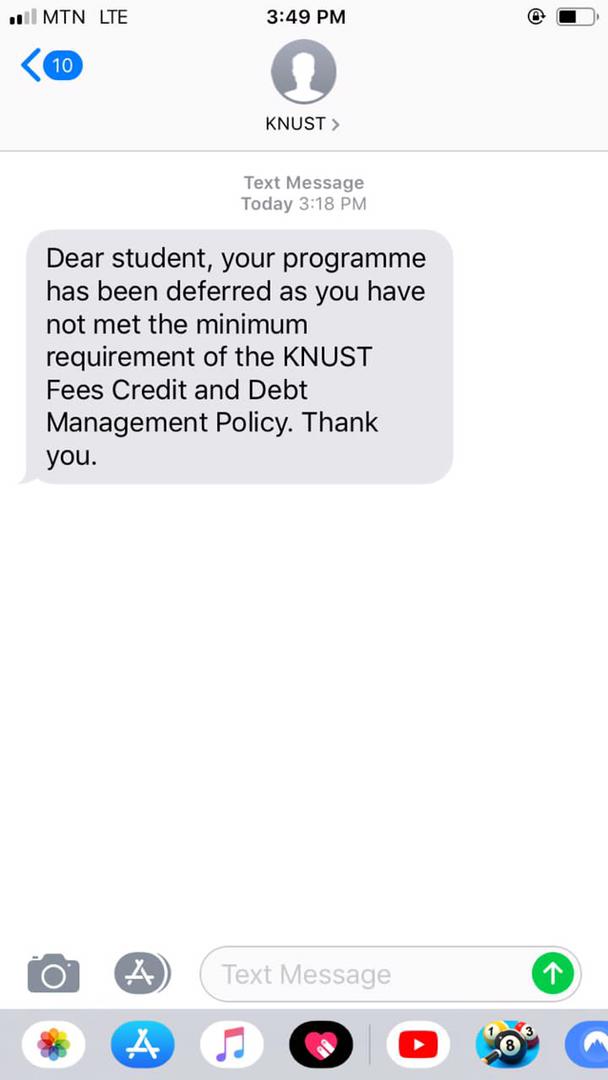 A third-year student who says he has paid more than fifty (50) percent of the school fees told Citi News he has been affected.

“The University has started deferring students. I have paid more than 50% of the school fees, but I have received a message that I have been deferred. The bursary that I applied for (Ketewaa Biara Nsua, KBN, by the SRC) has not reflected,” the worried student lamented.

World’s ‘Most Powerful Passports’ For 2022 Revealed

Accra Floods: People should learn how to swim – Cwesi Oteng