Suspected assailant beaten to death by man and his two wives

An unidentified assailant has been beaten to death by a man and his two wives at Sekyere Afram Plains in the Ashanti Region.

The deceased is said to have attacked a house where a man married to two wives lived and shot the husband.

As narrated by the District Chief Executive for Sekyere Afram Plains, Sulemana Hamidu, the incident occurred on Tuesday, May 10, 2022.

“It happened in a community called Takorase Dagomba Electoral Area. The man has two wives and somewhere late into the night he heard his dogs barking and so he decided to go out and find out what was happening. As soon he opened his door he heard a gunshot, he was hit but was not incapacitated. He was brave enough to overpower the person who fired the gunshot.

“His two wives joined in and they beat the assailant to death,” he told Oyerepa FM.

According to the DCE, the police who later reported to the scene found a locally manufactured pistol, a knife and some unspent bullets on the masked assailant.

A mobile phone was also found on the deceased whose body has since been conveyed to the mortuary for preservation while investigation continue into the matter.

“The man who was shot is also receiving treatment at the Agogo Presbyterian Hospital.

“The gunshot hit his chest area and portions of his face. Some of the pallets are inside his body so he is scheduled to go through surgery for the pallets to be removed,” the DCE added. 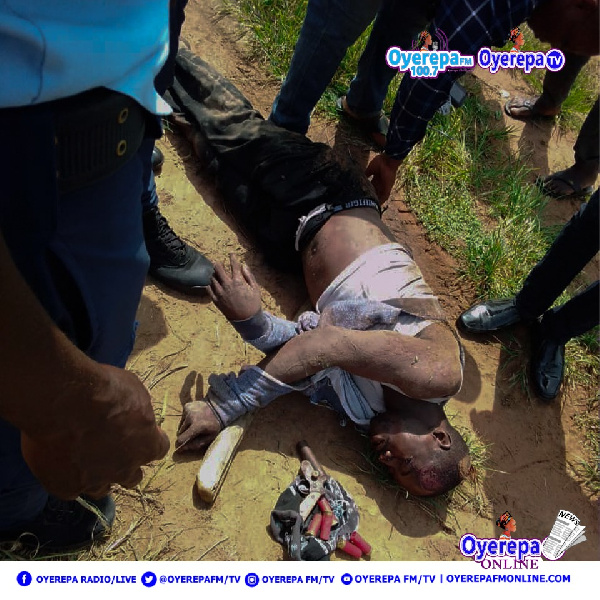 One dead, another reported missing after fishing vessel sinks between Elmina and Takoradi